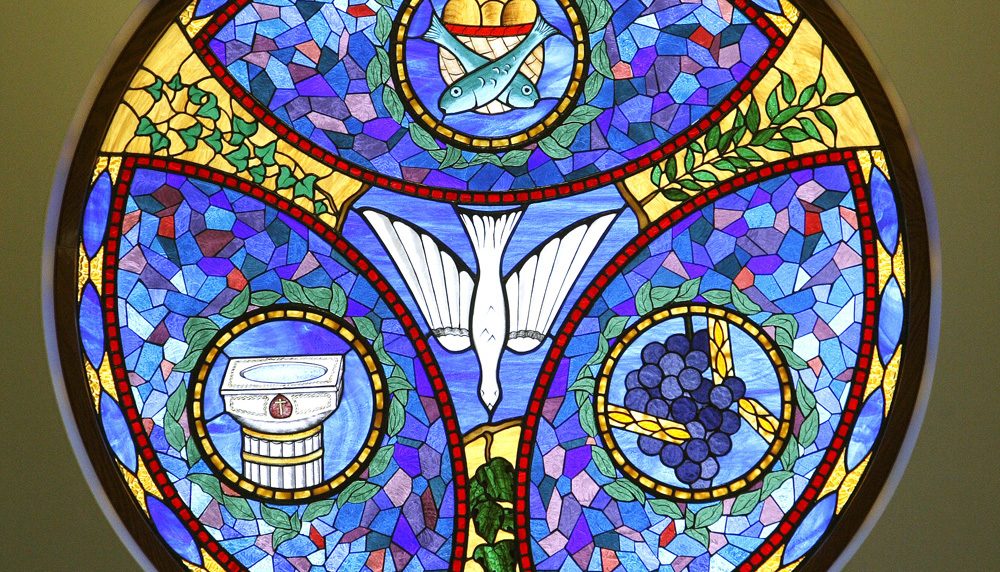 HEART PRAIRIE LUTHERAN CHURCH
Situated in the bluffs of the Kettle Moraine overlooking Whitewater Lake
stands a little brick church surrounded by a pioneer cemetery. For well over a
century, this early Wisconsin Norwegian church has attracted people because of its beautiful simplicity and its historic preservation.

In 2019, Heart Prairie Lutheran Church is celebrated its 175th anniversary.   A Scandinavian arts and crafts display as well as a sampling of Norwegian food was presented, followed by a historical program with Norwegian music.  At 8:30 PM an Oil Lamp service (Høymesse) took place inside the church.

The Heart Prairie Lutheran congregation was organized in December, 1844,
by the second Norwegian Lutheran minister in America, C. L. Clausen. Services
were held under trees, in log cabins, and a school house until about 1855. This was
probably the year the Norwegian pioneers began hauling brick by oxcart to build
the present church. The building may- not have been completed until 1857. About
this time, the congregation joined with congregations at Whitewater, Skoponong
(Palmyra) and Sugar Creek to call the same Lutheran pastor. This practice
continued for many decades.

During the latter 1800's, the congregation grew to well over 100 members,
a large church for those years. Until- the 1880's, the church had no organ. The
klokker, a sexton and parish clerk led all the hymns and some prayers from the
front of the church. The pastor's salary in 1891 was #139.50 plus some oats and
hay for his horse. The church janitor was paid $10 per year . Norwegian was used
exclusively in the church until 1902. It was only then that English was introduced
into the services. During the early 1900's membership began declining due to
families moving out of the Heart Prairie area. Finally in 1948, because of lack of
members, the Heart Prairie Lutheran Church merged with First English Lutheran
Church of Whitewater.

During the months of June, July and August, worship services are held each
Saturday at 5 p.m. and each Sunday at 8 a.m. Special Oil Lamp services are also
held at 8:30 p.m. the last Sunday of each' summer month.

The Heart Prairie Church has become famous for its historical, architectural
and religious features. Historically this church may be the oldest Norwegian
Lutheran Church in America' still being used in its original state. One can step into
this little church and take a trip back into the pioneer era of Wisconsin - the era of
reed pump organs, oil lamps and simple decor. One can walkthrough the
graveyard and read the stones of many children and young men and women visible
reminders of the difficult lives the pioneers led. Architecturally the church is fine,
lasting example of pioneer building. Brick was used not only to build walls, but
also to supply ornamental and decorative details. Religiously, the little lake church
w,as built for the glory of God, and it is a lasting monument to the spread of the
gospel of Jesus Christ in the New WorId.

Music is provided by pump organ
Heart Prairie has no electricity or heat.